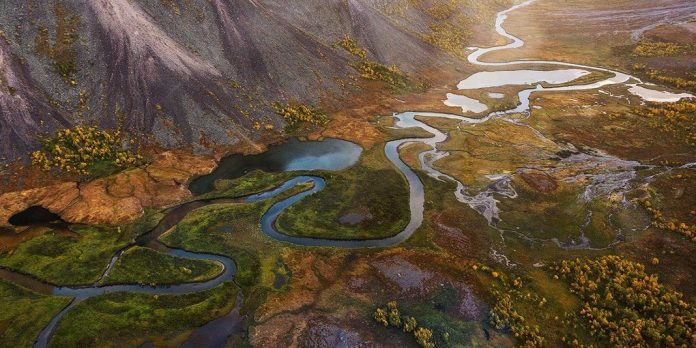 Abisko National Park – Beyond the Arctic Circle, Abisko is the northern gateway to the legendary Kungsleden (King’s Trail) that takes you across 440km of wild Sweden.

If you stand on top of the alpine massif of Mount Kebnekaise – Sweden’s highest mountain – you’re looking down at a pristine landscape wrestled from the grip of an ice age. Glaciers still stretch across the flanks of the neighbouring mountains and, while their larger brethren have retreated from the valleys that they once filled completely, the deep, narrow canyons and steep rock walls testify to a violent ge- ological past. Everything is on a larger scale here. You hike for an entire day and re- alise that you’re not even halfway along the Tjäktjavagge valley. Lakes Torneträsk and Akkajaure are like two inland seas. The birch and spruce forests that cover the foothills seem endless.

Abisko National Park came into being in 1909, making it one of the first in Swe- den. Forming part of Sápmi, the historic roaming lands of the Sámi that span a large part of northern Sweden, Norway, Finland and Russia’s Kola Peninsula, Abisko has been home to Sweden’s only indigenous peoples for thousands of years. Their hunter ancestors followed the retreating ice into Abisko’s valleys after the last ice age, 10,000 years ago, and remains of ancient hearths and pit traps used to capture wild reindeer and elk can still be found today. Centuries ago, the Sámi switched from hunting to herding, and reindeer husbandry is still prevalent in Abisko, divided between the forest Sámi and the mountain Sámi communities and dictated by the seasons.

Forest reindeer herding is more stationary, with the forest Sámi moving their reindeer between foraging grounds in the wetlands and conif- erous forests. The more nomadic mountain Sámi follow their reindeer along ancient migratory routes from low-lying birch and coniferous forests to summer pastures in the mountains, corralling them along the edges of the Kebnekaise range.

Abisko National Park – When to go

Hike under the midnight sun between late May and mid-July. Prepare for mosqui- toes in July and August, the warmest, most popular months for hiking. September and October paint the trees gold and red. Ski under the northern lights from November to March.

Abisko is the northern entrance to the 440km Kungsleden (King’s Trail) in the very north of Swedish Lappland. The town of Abisko is a 10-minute drive from the trail- head. Kiruna is the nearest airport, two hours’ drive away.

10,000 Years that the Sámi have lived in the park area

Starting as a small igloo–art gallery in 1989, the Icehotel has grown into a winter ex- travaganza built of ice blocks, its corridors decorated with extraordinary ice sculp- tures and its rooms created afresh each year by artists. Sleep on beds of compact snow, reindeer skins and army-issue sleeping bags. The main building is surrounded by satellite bungalows with skylights for watching the northern lights. The restaurant is one of Sweden’s best. Dog-sled pickup is available from Kiruna airport in winter.

This mountain lodge has a picturesque location at the foot of Mount Kebnekaise. Superb meals are conjured from locally sourced ingredients. In summer, arrive by helicopter; in winter you can opt for reindeer sled or snowmobile.

The gateway to Abisko, this lodge draws backpackers with simple dorms and the rest with hotel-style rooms. Guests can treat themselves to three-course gourmet dinners.

Abisko National Park – Do this!

One of the best places on Earth to experience nature’s most spectacular light show. With eerie streaks of green, white, red and yellow streaming across the night sky, is the Aurora Sky Station. Chairlifts run to the lookout tower on top of Mount Nuolja between November and March, and its location away from any city lights makes viewing conditions particularly favourable. In winter, Lights Over Lapland runs nightly Aurora Borealis photography tours from Abisko Mountain Lodge, with professional photographers teaching you how to capture the winter night magic.

The Sámi village of Rávttas teaches visitors about nomadic Sámi life, which re- volves around reindeer. You’ll learn to distinguish between individual deer, ride a sleigh (in winter) and indulge in Sámi dishes around an open fire in a traditional lavvus (teepee).

Imagine yourself on a sled, shouting commands to your team of baying huskies. They surge past the frozen river and over the pristine landscape, snow flying from under their paws. Brothers Tomas and Andreas at Abisko Fjällturer can teach you everything about mushing.

Reaching the summit of Sweden’s highest mountain (2106m), this strenuous 12- hour-return, 20km hike rewards you with all-encompassing views of the sur- rounding tundra.

This easy 14km hike takes you to a reconstruction of a traditional Sámi camp and a former Sámi sacrificial site with awesome Lake Torneträsk views.

The park’s longest hike, this 105km, six-day trail leads you past pristine lakes, along verdant valleys, over the scenic Tjäkta Pass and around the iconic Mount Keb- nekaise.

Abisko National Park – What to spot…

Illuminated by the northern lights in winter and the midnight sun in summer, Sweden’s northernmost national park is marked by surprisingly mild winters, due to the region’s microclimate, and brief, warm summers. Habitats include subarctic forests, alpine rivers, subalpine grasslands and quaking bogs. Larger mammals such as reindeer and moose are diurnal and spotted year round; in winter, tracks on the snow reveal shy wolverines, foxes and lynx. Feathered denizens include golden eagles, buzzards, falcons and a wealth of wading birds.

This immense, solitary herbivore is best spotted at dusk or dawn, when it forages for food. Moose are extremely good swimmers, can dive for underwater plants and can run up to 60km/hr.

These herbivores can find food even under snow, digging for lichen with their hooves. Domesticated by the Sámi, they graze all over Abisko. Like human fingerprints, no two reindeer antlers are the same.

This solitary omnivore that looks like a bear but is the largest member of the weasel family is both diurnal and nocturnal. It feeds on plants, berries and ro- dents and takes on weakened moose.

Survey the Arctic north from the top of Sweden’s highest mountain and hike part of Sweden’s longest hiking trail. Staying awake under the midnight sun? That too.

Get a taste of the park in the least amount of time by taking the gently undulating, 8km trail from Abisko Turiststation along the Ábeskoeatnu River and then along the left fork of the signposted Kårsavagge trail through birch and pine forest to the tumultuous Kårsa rapids.

Then, in the evening, cap the day with a chairlift ride to the Panorama Café at the top of Mount Nuola. And watch the midnight sun cast a pearly glow over the lake and forest. Spend the night at Abisko Turiststation. Rent a bicycle the following day and take on the 39km-long Rallarvägen (Navvy Rd) to Riksgränsen. It runs parallel to the railway line from Abisko towards the Norwegian border and was used by railway-construction workers in the early 20th century. Or, for a shorter biking adventure, take the train to Låktatjåkka and do the 10km return trip to the enormous boulders and rock formations of the Kärkevagge valley, with Trollsjön (Sulphur Lake) its showpiece.

One of Abisko’s highlights is following the 19km trail from the park’s eastern en- trance, Nikkaluokta, to the foot of Mount Kebnekaise. The trail passes Lake Laddju- javre; you can cut 6km from your hike by catching a boat across the lake in sum- mer. From STF Kebnekaise Fjällstation you have a choice of two trails to the sum- mit of Mount Kebnekaise. The Vastra (western) trail is gentler but longer (25km re- turn). While the last part of the shorter Ostra (eastern) route (20km return) in- volves a steep scramble to the summit and sometimes crampons to get across the glacier.

The western trail takes you into the Kitteldalen valley and involves fording two streams. Ascend the steep track to Vierramvare, with the summit on your left. If you have the energy on the way down, you can visit the lesser Toulpagorni peak. Recuperate at STF Kebnekaise Fjällstation and either retrace your steps to Nikkalu- okta or take the daily Kallax Flyg helicopter.

A week or more

For the park’s longest hike, take the Kungsleden from Abisko Turiststation. The trail follows the rapids of the Ábeskoeatnu River as it gushes along a narrow canyon, before passing through a vast, gentle valley and then dense beech forest, where wooden boardwalks carry you over bog land and bridges help you traverse streams.

You pass several small lakes en route – ideal for skinny-dipping first thing in the morning or if no other hikers happen to be passing by! Around 35km from the start, the trail climbs to a mountain ridge, from which you’ll have fantastic views of the countryside you’ve just tramped across. There’s a sauna here at Ales- jaure cabins to take care of your aches and pains. The highest point of the five- or six-day trek to Mount Kebnekaise takes you over the Tjäkta Pass (1150m). Where you’ll occasionally find snow even in June. Take a day to hike up Mount Kebnekaise and then either carry on south along the Kungsleden or walk out to Nikkaluokta.

14 FUN FACTS ABOUT THE GREAT WALL OF CHINA